My first venture into all grain brewing has literally blown up in front of me.  So who know how it tastes, but here is what happened.   After coming home from vacation I saw liquid coming from the fermentation chamber.  When I opened the doors about 6 bottle or so had exploded at the bottom.  So I took everything out and cleaned things up, exactly what you want to do after a long travel day.  Just as I was putting the beers back in the fridge, the bottom of a six pack broke open and the bottles dropped maybe a foot.  Well all 6 of those bottles exploded.  Sounded like a bomb went off.  I was lucky no glass hit my face, but my legs and feet were not so lucky and had blood streaming down.  Now I had another mess to clean up.  So while I was cleaning that up 2 more bottles exploded just sitting on the sidewalk.  Awesome, I have bottle bombs.  Not wanting to loose everything. I place the remaining beer bottles in a cooler and inside my fridge.  That night I heads several more explode…sounded like a gun shot.  Hoping to save the beers, I planned to pop the tops on the remaining bottles and then re-cap them.  I put on my bomb squad gear (an old paintball face mask, a thick long sleeve, and some gloves) and reached into the cooler to take the tops off.  The first one gushed everywhere, same with the second, third and so on.  After a bit there was so much foam I was just feeling through the cooler to find unopened bottles.  Well needless to say this was a total loss.  I did try about half a glass full just to see what it was like and it was sweet almost like the raw wort.

So here is what I think happened.  During my last batch of beer my fridge died, so I didn’t really have good fermentation control while this beer was fermenting.  We had really hot days and warm nights.  I think the yeast shutdown due to the high temperatures.  I should have noticed that my final gravity reading was high and done something, but just moved right into bottling.  After I bottled I also replaced the AC unit with a min-fridge coils and was able to set the temp.  I think when I did this the yeast woke up again and started chomping on all the unprocessed sugars, thus creating my bottle bombs.

On the fun side, I got some 3/4″ stickers to make cap labels for my beers.  I got lucky and made labels for my previous beers as I had to move my bottles all around while cleaning.  Making a label is now part of my beer making process. 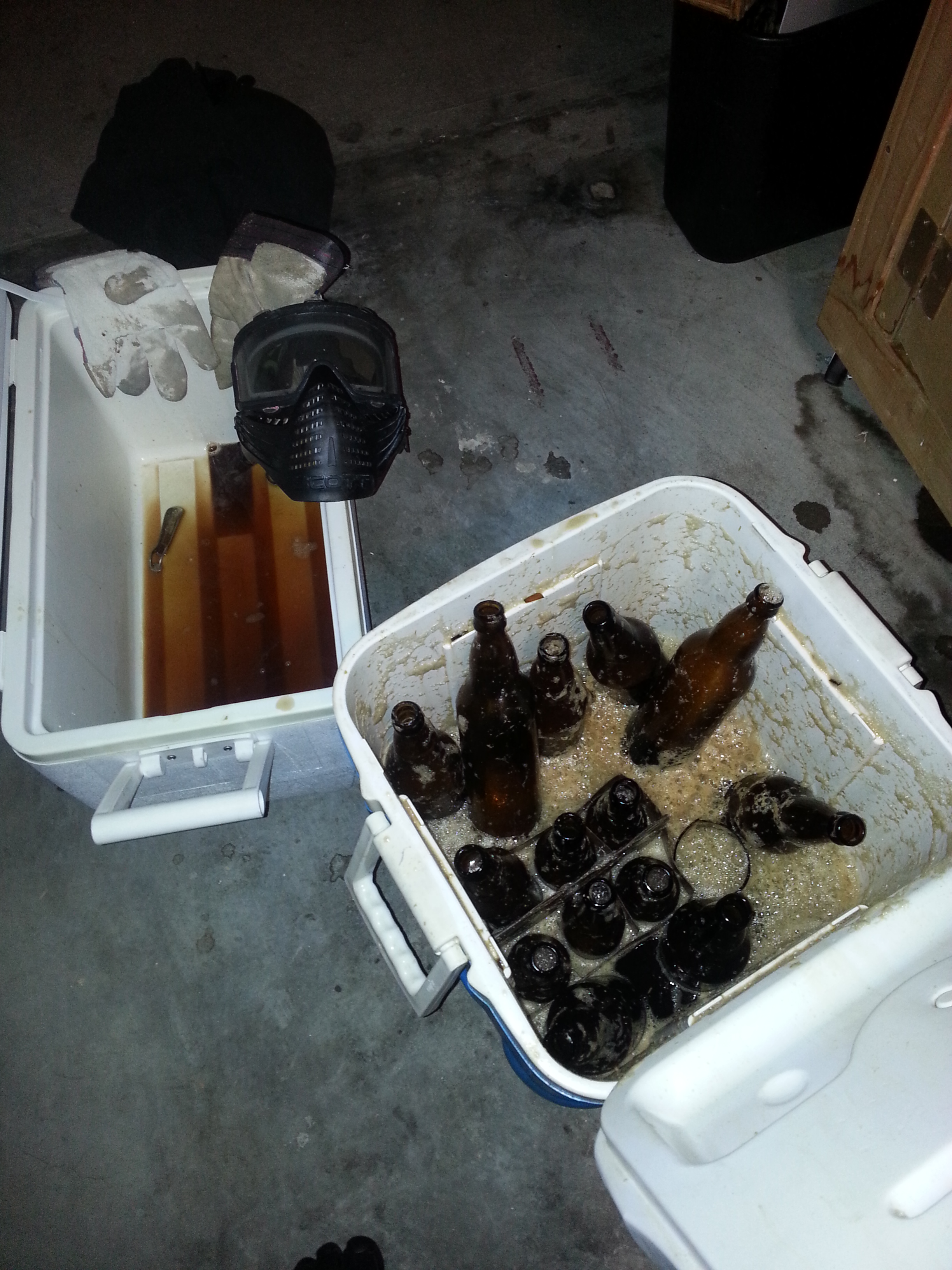 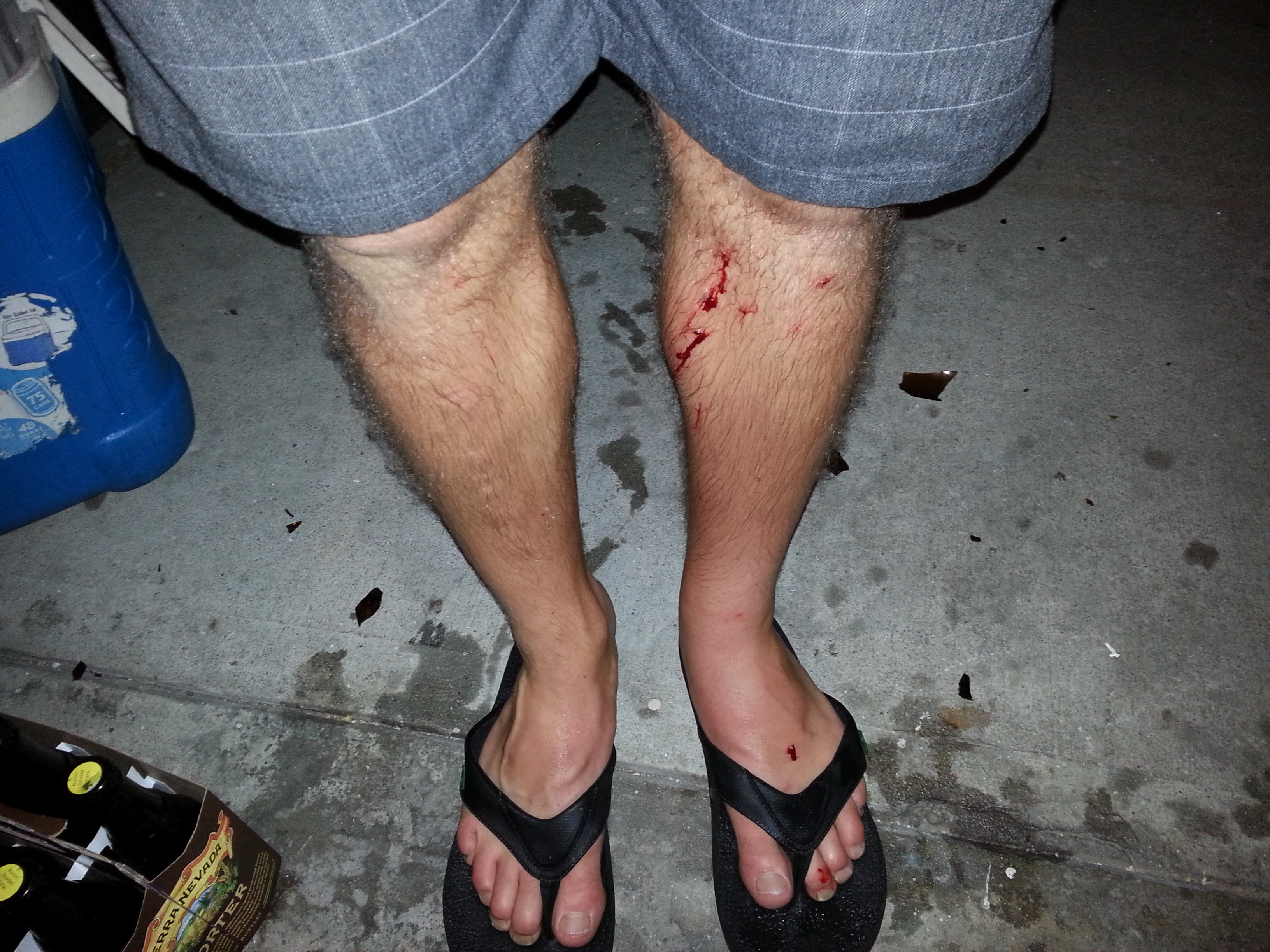 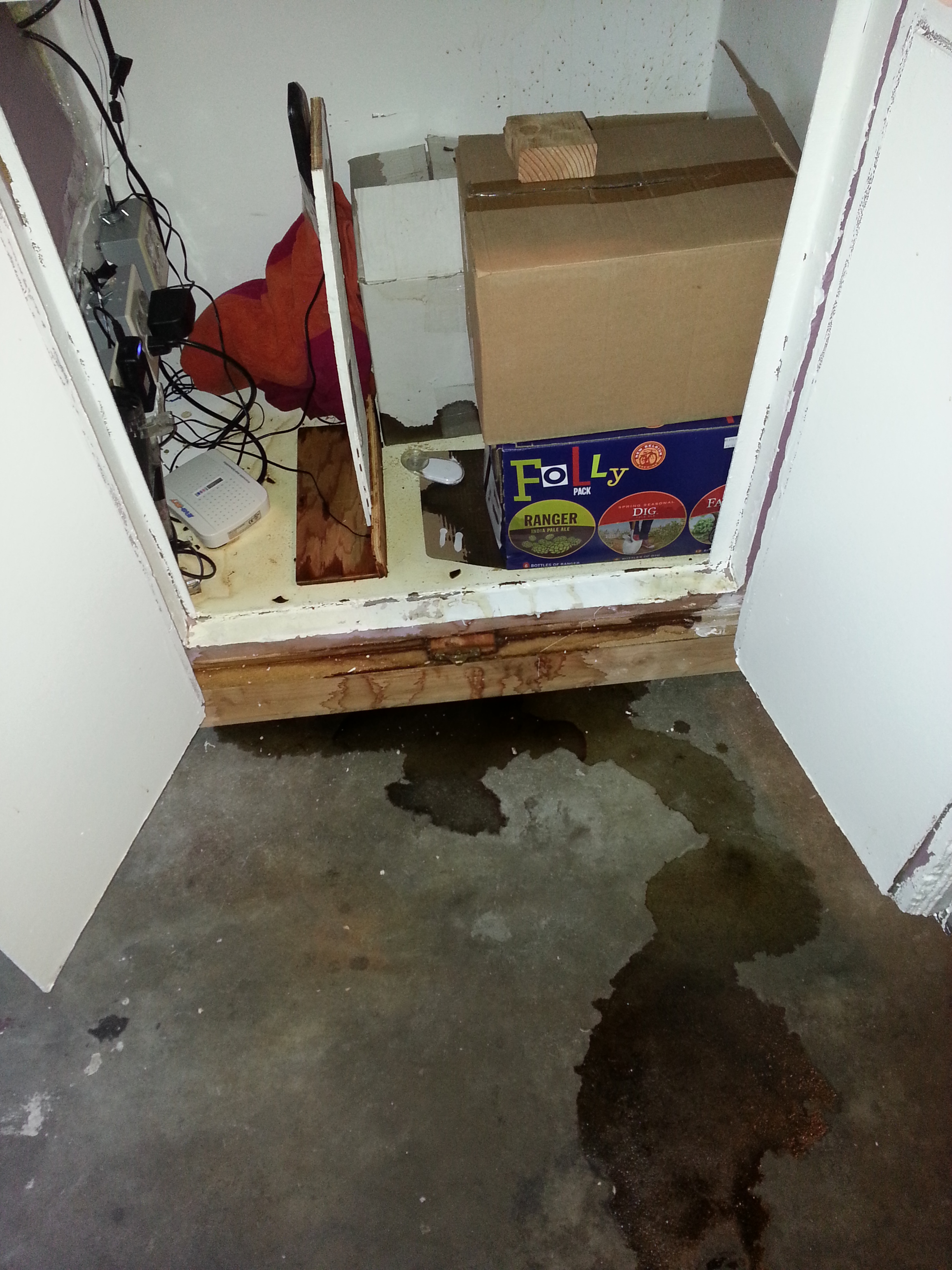 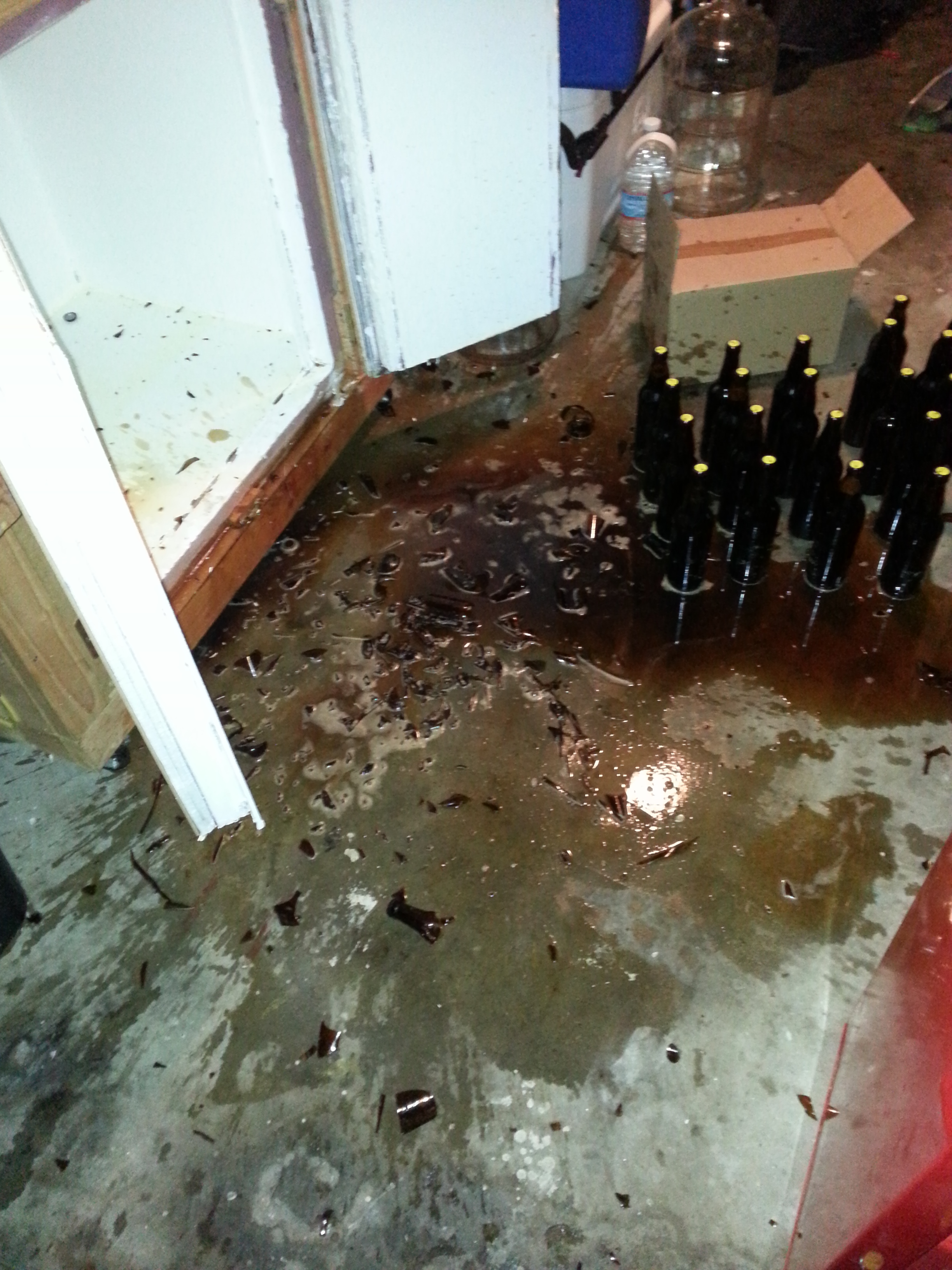 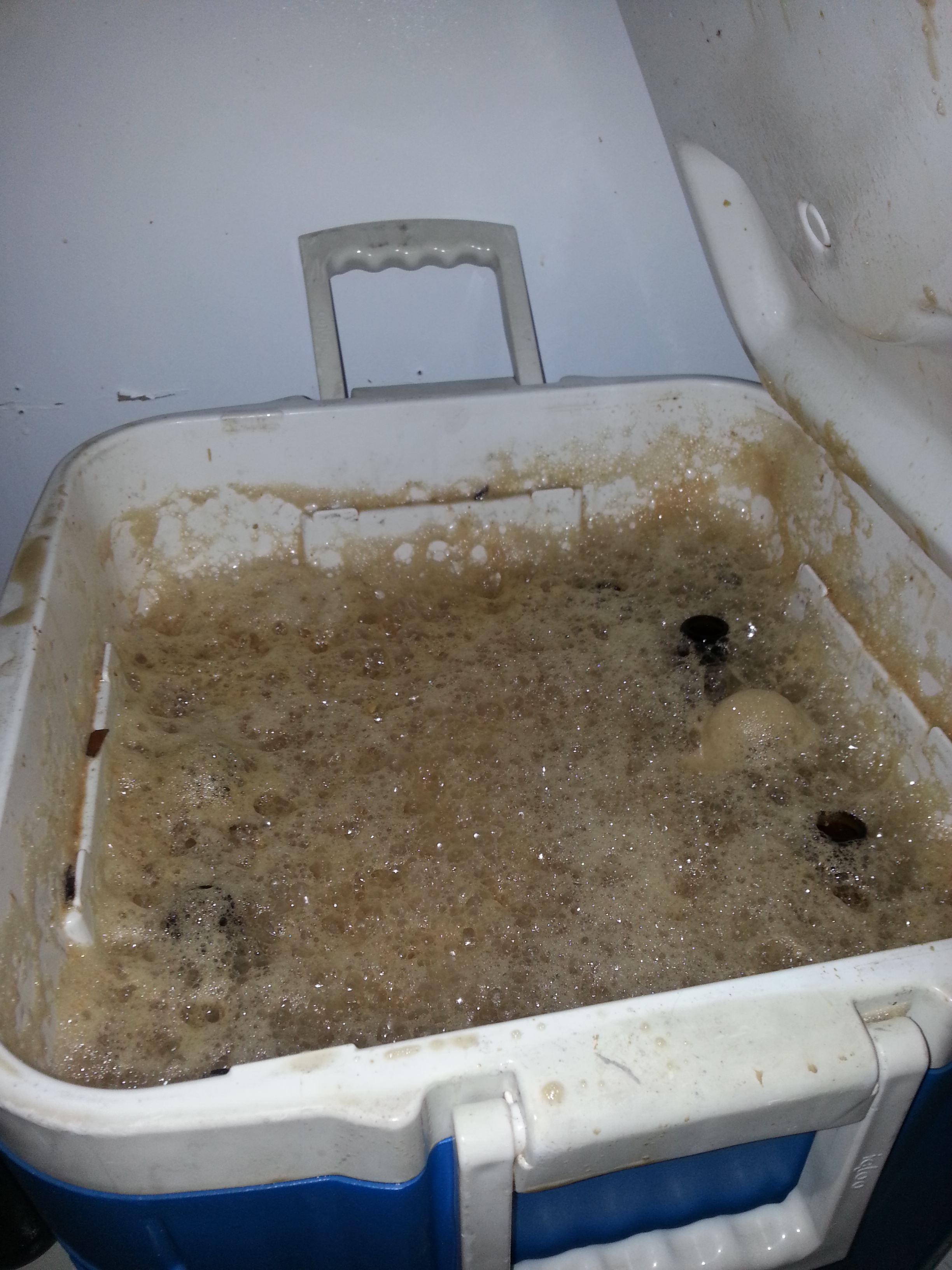 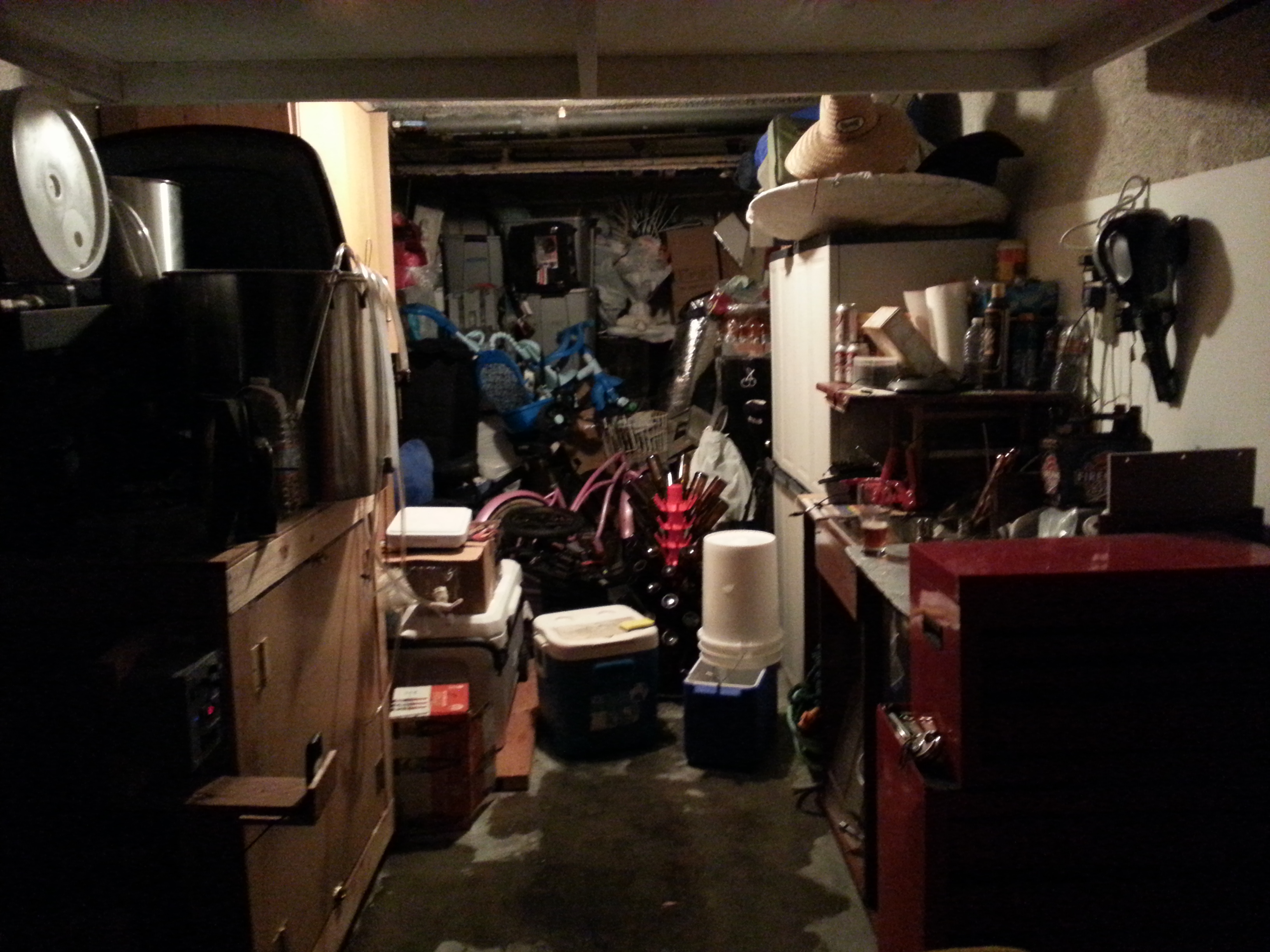 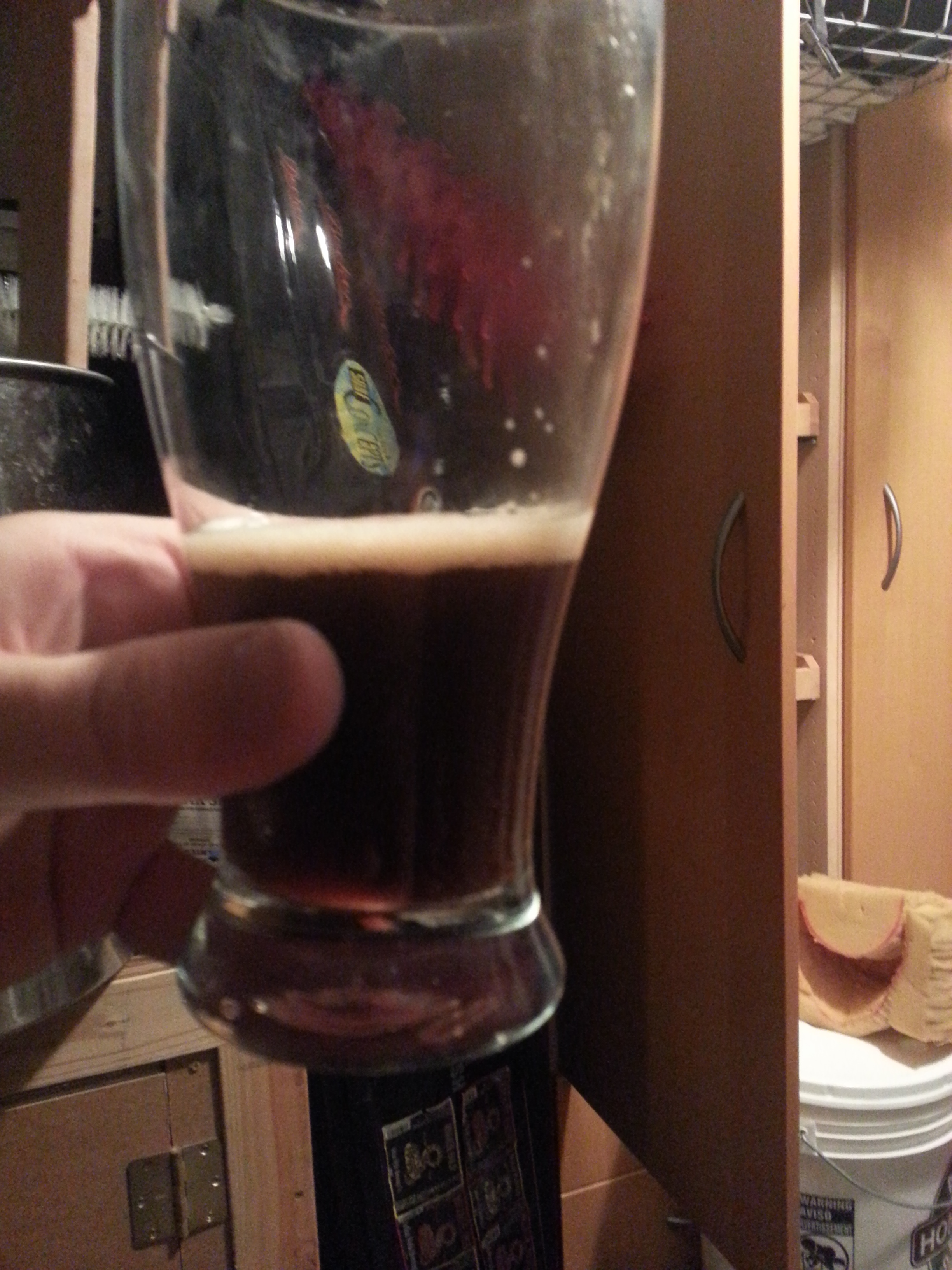 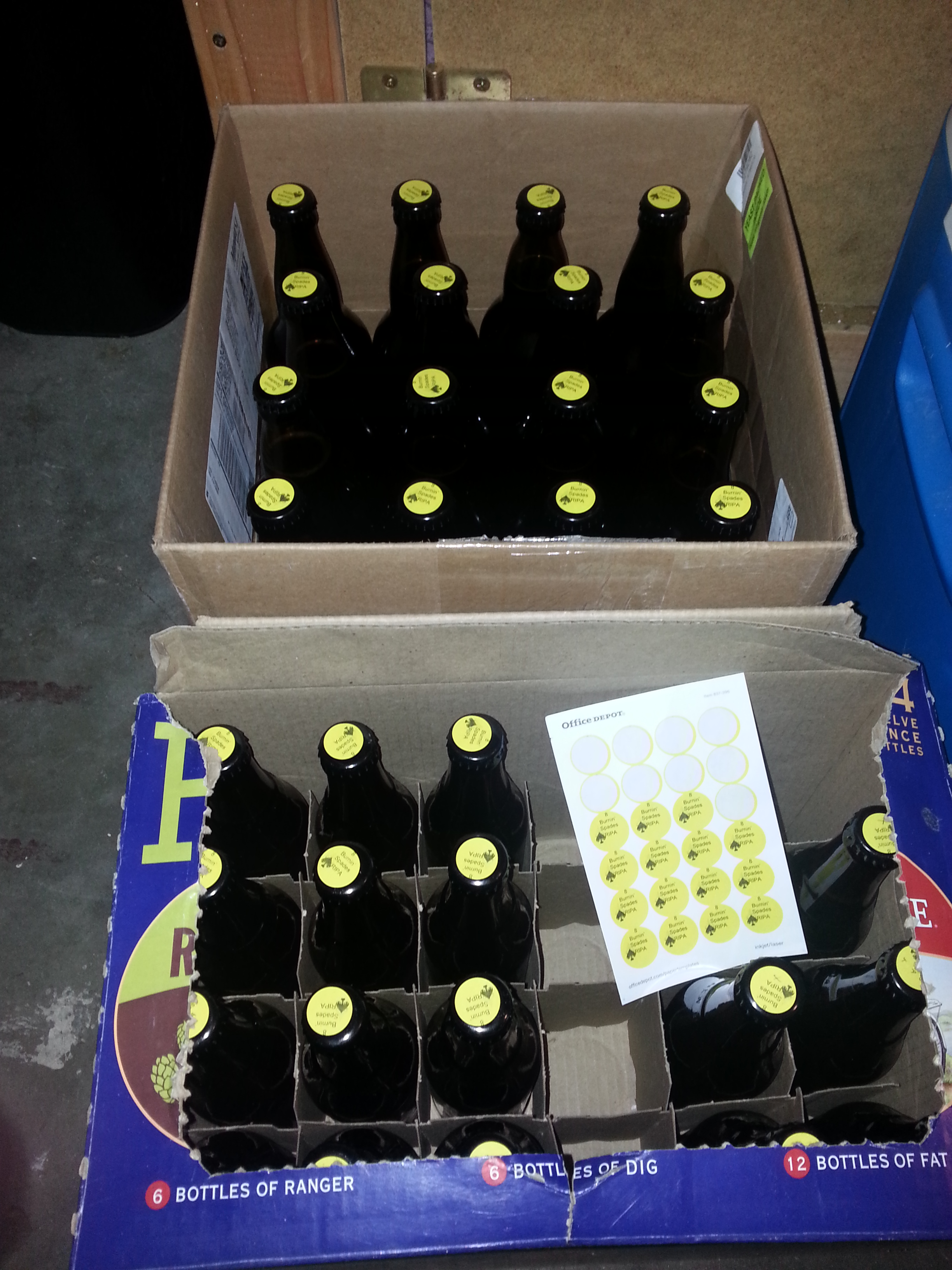 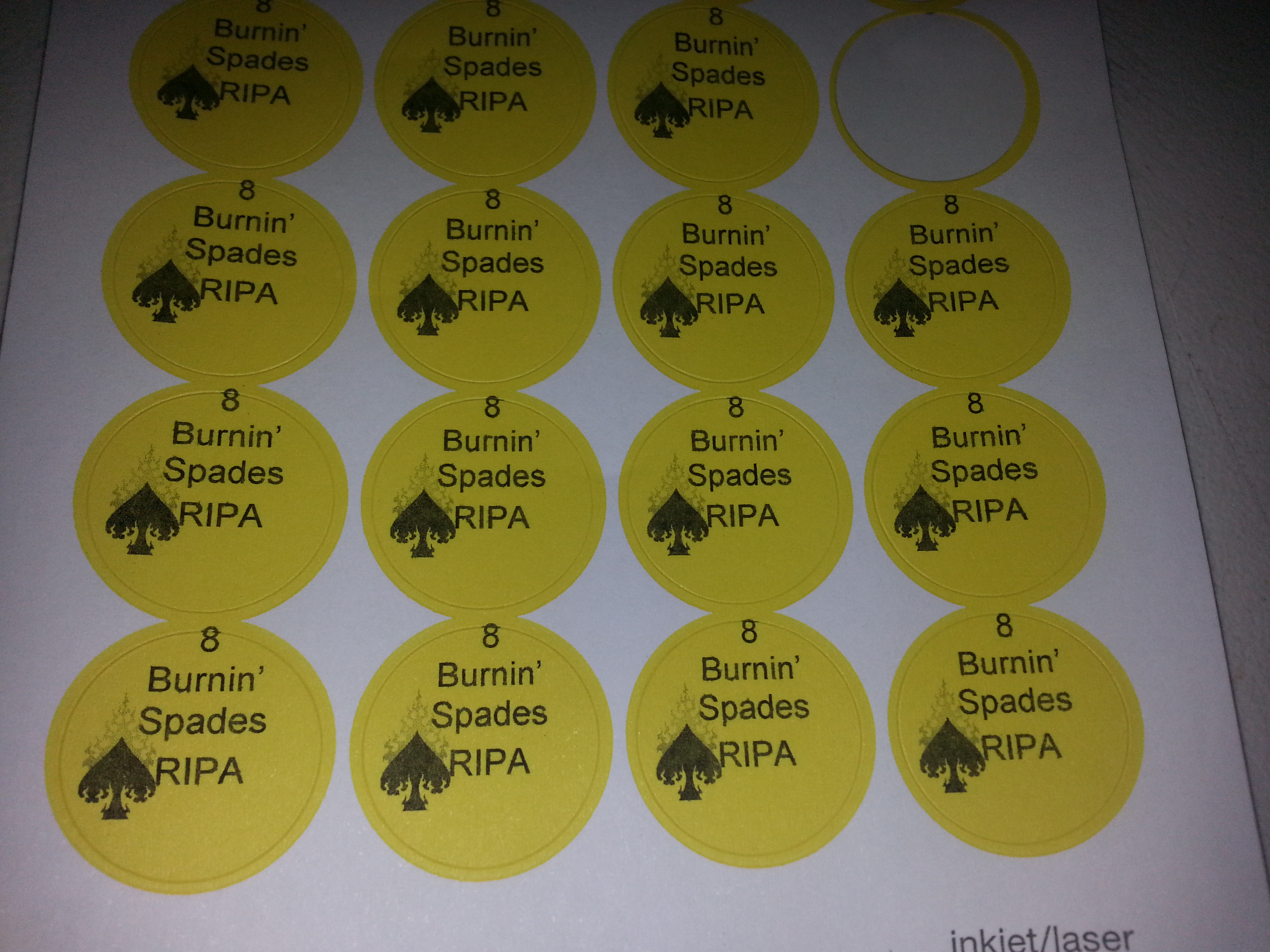 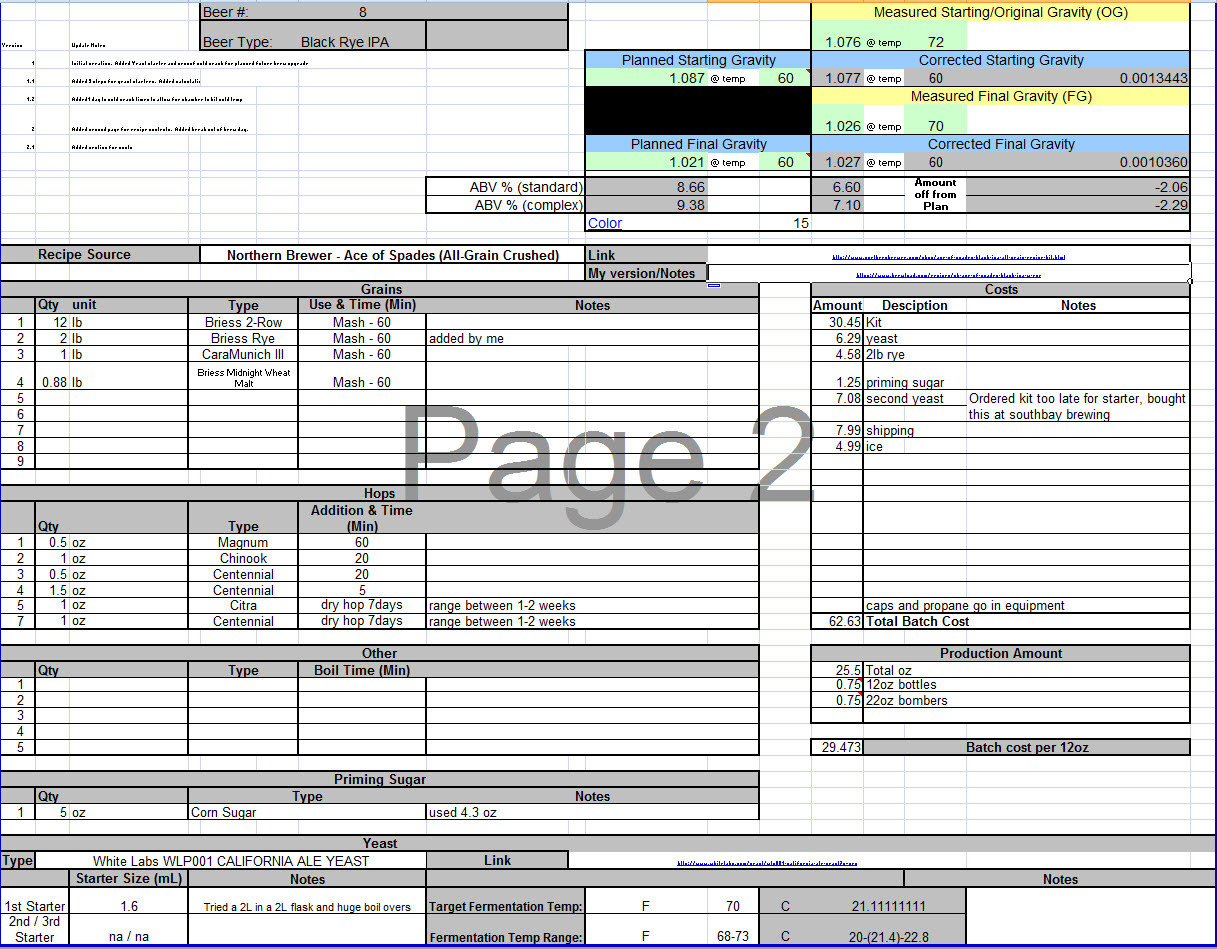 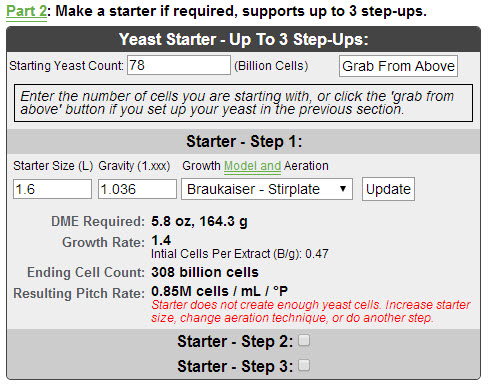 Tried making a 2L starter in a 2L flask.  Resulted in a boil over.  Separated into two flask for the boil then recombined when they cooled.  Ended up with 1.6L of the 2L.

First time making all grain batch.  MLT filter was too small and got a stuck sparge.  I knew what my number were supposed to be, but wasn’t prepared to be able to measure if I was hitting them or not (ie. depth to volume conversions). Messed around switching in a different filter which caused the temps to go wild.  Through all the hops directly in which wasn’t so bad.  What was bad way the bag I had to catch the gunk at the output end of the hose when transferring to the primary got clogged up and ended up not using it which passed a lot of material in the fermenter.  When transferring to bottling bucket the the filter around the tube also was causing problems so a lot of material ended up in bottles.  Need to do this better next time